Dnipro is an administrative and cultural centre in the Dnipropetrovsk Oblast and one of the major cities of Ukraine. It is located 470 km southeast from Kyiv. The area of the city is 405 km2 and its population is about one million people. Dnipro is one of the most important industrial centres of Ukraine with more than 1,100 big and medium enterprises.

The proposed project involves the installation of IHSs in one district of Dnipro. The district concerned is served with heat through the CHS-6D and all the connected buildings will be equipped with IHSs which makes it possible to close down both the CHS and the distribution pipelines for domestic hot water. The investment will significantly reduce the energy use and water losses in the project area which will reduce the use of fossil fuels in the combined heat and power plant that supplies the buildings with heat. These parts of the district heating system will be converted to a demand driven system.

The proposed project is interesting from a demonstration point of view as the introduction of IHSs in the area will increase the quality of heat delivery to the connected buildings and the system will be converted towards a more sustainable demand driven system.

The initial project areas are located in the eastern parts of the city of Dnipro. Several of the districts are quite large and not suitable for the size of this project. However, three districts were identified as appropriate in size: CHS-6D in Donetske Avenue 150K, CHS-7 in Berezinska Street 20K and CHS-3 in Rotorna street 20K. The two districts CHS-6D and CHS-7 are indicated in the upper “project area” in the following figure while the lower “project area” is referring to district CHS-3. After further discussions, the project considers the modernisation of the area served from CHS-6D. 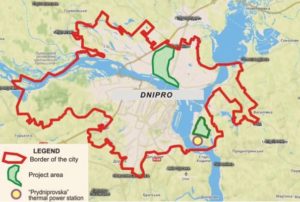 Figure 1: Map of Dnipro with indication of the project area

Specifics of the Dnipro project include:

The proposed investment is EUR 373,000 with a simple pay-back time of 7.4 years. The proposed financing plan is as follows:

The project is expected to benefit the local community by:

*Baseline is estimated for the networks in question only (not the entirety of the district heating in Dnipro) for the case of no-project activity.