Interconnection of two micro-districts into a joint district heating network

Chernivtsi is an oblast centre in Ukraine, located 425 km to the southwest from Kyiv. Chernivtsi has 263,000 inhabitants and is an important administrative and cultural centre. The most developed industries in the city are food industry, light industry, mechanical engineering and woodworking.

The heat supply of Chernivtsi city includes centralised and individual heating systems. District heating is provided to residential buildings, public and commercial facilities. There is no domestic hot water supply from the centralised system in the city. The municipal company “ChernivtsiTeploKomunEnergo” is the only district heat supplier and covers the whole area of the city. The company operates 86 boiler houses with a total installed heat generation capacity of 500 Gcal/h, as well as about 100 km of district heating networks.

The project is interesting from a demonstration point of view as it enables efficiency improvements in generation, distribution and use of district heating in line with the Ukrainian Energy Strategy 2030.

Replacement of distribution pipelines within S. Schedrina area, as well as and install 17 IHSs at all the buildings connected to this district heating network will further reduce the use of fossil fuels and will make it possible to operate the S. Schedrina part of the district heating system as a fully demand-driven and modern system. By replacing district heating pipelines, heat losses, water losses and maintenance costs are reduced and by replacing obsolete pipelines the quality of heat delivery will be increased.

Installation of a biofuel boiler will dramatically reduce the use of natural gas.

The number of people living in Zalozetskogo and S. Schedrina areas supplied with district heating is approximately 2,500 and 2,000 respectively, thus modernisation affects a total of 4,500 people who will benefit from the improvements in their district heating system. 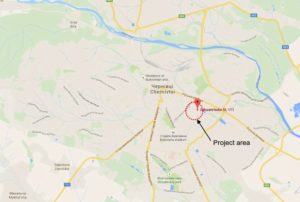 Figure 1: Map of Chernivtsi with the indication of the project area

Specifics of the Chernivtsi Project include:

The proposed investment is EUR 960,000 with a simple payback time of 4.4 years. The proposed financing plan is as follows:

*Baseline is estimated for the networks in question only (not the entirety of the district heating in Chernivtsi) for the case of no-project activity.

The project is currently in the implementation stage. Please check our procurement page for the announcement of project procurements.