Bila Tserkva is a city located in Kyivska Oblast. It is located 84 km to the south from the capital of Ukraine. Bila Tserkva is the home to 200,000 people and is an important administrative and cultural centre. Bila Tserkva is famous for its park called “Olexandria” as well as churches that, according to the legend, gave the name to the city which can be translated as “White Church”.

The project proposed for Bila Tserkva is aimed at reduction of use of natural gas and increase of system efficiency in an economical way. The project implies interconnection of the two district heating systems in the Western part of Bila Tserkva and modernisation of one of the local production plants with installation of a biofuel boiler. All buildings of the network area will be connected to the district heating via individual heating substations (read about how individual heat substations help with energy saving for the houses) and the existing pipe distribution network will be converted. The investment will reduce the use of fossil fuels in the system and enable the possibility to operate the DH system as a fully demand driven and modern system.

The project in Bila Tserkva is interesting from a demonstration point of view. The primary reason for this is that the investment covers a substantial modernisation of the system, from the boiler to pipelines and IHS. Introduction of bio fuel as the base load in combination with decreased thermal losses and higher efficiency will reduce the use of natural gas and emissions of CO2. Furthermore, another district heating network is located in a close proximity to the project area and can be interconnected in the future.

The project area is situated in the western part of Bila Tserkva city and includes heating networks supplied from two boiler houses at the addresses: (1) Str. Skvyrske Shose, 242; and (2) Str. Skvyrske Shose, 263. These networks supply 11 residential buildings, 4 dormitories, buildings of the Medical College, bicycle sport school “Promin”, Department of Family and Youth Affairs of the City Executive Committee and other. Modernisation of the two networks affects a total of 2,600 people who will benefit from improved heating services. 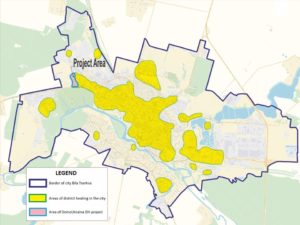 Figure 1: Map of Bila Tserkva with indication of the project area

Specifics of the Bila Tserkva Project include:

The proposed investment is EUR 593,000 with a simple pay-back time of 7.5 years. The proposed financing plan is as follows:

*Baseline is estimated for the networks in question only (not the entirety of the district heating in Bila Tserkva) for the case of no-project activity.

The project is currently in the stage of receiving all the necessary approvals in preparation for its implementation.