The DemoUkrainaDH programme, financed by Sweden, was established by Nefco almost ten years ago to demonstrate and promote modern approaches to district heating. Time-tested technologies and design principles that can provide optimal economic, environmental and social value are the core of the engineering solutions on offer for DemoUkrainaDH projects. Unfortunately, many such solutions are not compliant with Ukraine’s engineering norms and standards, thus making them impossible to implement. Throughout the lifetime of the programme, the DemoUkrainaDH team counted at least 20 regulatory demands that prevent the implementation of best available technology in Ukraine. These outdated rules make Ukraine’s district heating systems unnecessarily expensive and less efficient while improving neither system reliability nor quality of service. In this article, we look into the details of one of these regulations and its consequences.

The impact of pipe roughness on the dimension of DH pipes

Pipe roughness is a concept that describes how smooth the inner part of a district heating pipe is. Pipe roughness is measured in fractions of a millimetre and reflects the size of the irregularities of the surface. A surface with a higher roughness creates more friction for a substance sliding over it, hence the need for greater pressure to propel it forwards. This means that more powerful pumps or increased pipe diameters are required.

Ukrainian estimates for pipe roughness are regulated by a compulsory norm that is three times higher than the average for a non-regulated market in the EU.

Typically in the EU and other European countries, each manufacturer undergoes a voluntary certification process by an independent third party that involves confirming compliance with standards (for instance: EN 253, EN 448, EN488, EN 489, EN13941) or other specifications (for instance: EN 10217-2, ISO 8501-1). All steel pipes for district heating supplied from a mill shall be made of materials according to EN 10217-2. The mill is certified by a third party and all pipes are delivered together with an inspection certificate according to EN 10204. Producers of pre-insulated pipes must use certified pipes and ensure at delivery that the pipes are free from rust, mill scale, oil, grease, dust and other contaminants according to ISO 8501-1. All necessary tests for selected samples are carried out by accredited testing institutes that conduct them according to the conditions defined in the abovementioned relevant standards. Pipe manufacturers are required to meet strict certification requirements for production, and customers expect guarantees for their equipment.

When it comes to conducting a feasibility study into the size of DH systems, European engineers typically use roughness values based on extensive experience to determine approximate diameters. Detailed engineering of a new or rehabilitated DH network is done using hydraulic models of the entire DH network, and the choice of diameters takes the hydraulic condition of the whole network into consideration.

In Ukraine, the situation is completely different. The Ukrainian compulsory engineering standard DBN[1] specifies an exact roughness value for DH pipes. Engineers are required to use this value to determine diameters, otherwise, the design will not pass the approval process of Ukraine’s state expertise. For supply contracts, calculations based on the official roughness value will determine the exact diameters of the pipes supplied. Turnkey contractors are not able to avoid the official pipe roughness estimate, as they too are required to undergo approval by state expertise.

What is the problem?

Different assumptions of pipe roughness typically mean that all else being equal, larger diameter pipes are used in Ukraine than in the EU.

Putting aside other advantages/drawbacks of the different processes, the key issue is the large discrepancy in pipe roughness values between Ukraine and the rest of Europe. Ukraine’s DBN V.2.5-39:2008 standard specifies a pipe roughness value of 0.0005 m (0.5 mm) for all steel DH pipes, while the market-average value in Europe is way below 0.00015 m (0.15 mm) – three times lower. In fact, studies show that even after significant periods of operation (many networks are 60 years or older), pipe roughness does not exceed 0.15 mm, making this a safe estimate. The roughness of new pipes supplied is from approximately 0.05 mm. The difference in roughness values is due to the fact that the Ukrainian standard is based on ‘heavily corroded pipes’, while the European market-average value is based on ‘lightly corroded pipes’.

The practical implications of the different estimates are huge. Table below shows that the DBN estimate for pipe roughness (0.5 mm) leads to calculated properties that are about 20% worse than the European estimate (0.15 mm). This means that all other assumptions being the same, European engineers calculate heat delivery to be about 20% greater than Ukrainian engineers for the same diameter of pipe. This difference in calculated heat capacity relative to pipe diameter leads to the use of pipes in Ukraine that are typically one size larger in diameter than they would be in the rest of Europe.

Table: Calculated properties of a selection of pipe diameters for different estimates of pipe roughness for the same typical design parameters (pressure drop at 1.0 bar/km, 100 Pa/m, and difference in temperature at 40oC).

Implications for the wallet

Using DH pipes that are one size larger in diameter, as a result of unreasonable assumptions for roughness and other Ukrainian regulatory aspects, results in an increase in equipment costs of up to 20% and about 10% greater heat loss. These unnecessary costs are ultimately paid by the DH customers.

The DemoUkrainaDH team conducted an analysis on the basis of a recent tender for pipe suppliers. The total cost of the pipes specified by the Ukrainian design was EUR 285,000, while for the design typically applied in northern European countries it was EUR 180,000. While pipe roughness is not the only contributor to higher costs, an increase in diameter of one size normally raises the investment cost by 9-20%.

The total length of district heating networks in Ukraine is about 21,000 km. The average difference in cost between two dimensions, for example, DN150 and DN200, is approximately 50 kEUR/km. Considering that the replacement of the entire district heating network is carried out every 20 years, the cost to taxpayers is about 20% higher than it should be, or about EUR 50 million per year, since the 60-year old Ukrainian pipe standard is still in use and the pipe dimensions it specifies have not been updated.

According to the regulatory set-up of Ukraine’s DH sector, the additional investment costs and heat loss are cost categories included in the estimation of DH tariffs. Thus, these unnecessary expenses will eventually be passed on to DH customers via higher tariffs than would otherwise have been, and/or taxpayers in general via subsidies.

The root of the roughness estimate

The estimate for the required pipe roughness value in Ukraine was made 60 years ago. Technology has developed significantly since then, but the assumption that governs the DH sector remains unchallenged.

DBN is a set of National Construction Norms in Ukraine. The norms are reviewed by the responsible authority and an updated version issued about once or twice a decade. This practice was established in Soviet times and was adopted by Ukraine. Going back in the history of DBN versions and its Soviet predecessor SNiP[2], it is possible to trace the development of the pipe roughness estimate over time.

The very first SNiP governing district heating networks was issued in 1962. Even back then, the pipe roughness was specified at exactly 0.5 mm, the very same value that is specified by the 2021 standards!

Figure: Print screen of the cover page of the very first standard governing DH pipes and the roughness estimate specified 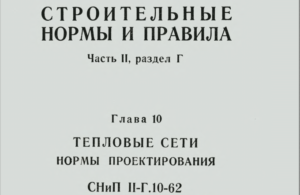 Pipe manufacturing technology has developed substantially since 1962, as have laboratory and measuring equipment and the general understanding of how to operate a district heating system. Today, the need for proper water treatment is well recognised, and the cost of maintaining DH water properties such that corrosion is minimised is a fraction of that of increasing pipe dimensions to accommodate the requirements of high pipe roughness.

Ukraine is the country with the third largest share of district heating in the world, and the DH systems are in acute need of capital repairs, including pipeline replacements. The excessive capital and operating expenses at the national level and paid for by the Ukrainian people due to one outdated value is outrageous, and there are still more items on the list of outdated norms that govern Ukraine’s district heating.

Article prepared by the DemoUkrainaDH team