Mariupol, near the Sea of Azov, is home to 450,000 inhabitants. It is one of the ten largest cities in Ukraine. Mariupol is also an important industrial city with operational metallurgical combinates.

Mariupol was selected for the SUDH programme based on the application from the city and its DH company. Read more here.

The Mariupol DH company and its long-term strategy

The Mariupol DH company (Mariupolteplomerezha) was established in 1967. The main task of the company is to ensure reliable provision of district heating (DH) and Domestic Hot Water Supply (DHW) services to its customers. Almost all the customers of the DH Company are households (99.4%); the share of budget institutions is 0.15% and other customers 0.45%, in terms of number of administrated customers. DHW is only provided during the heating season. About 100,000 (77%) customers use the DHW service.

Since 2007, Mariupol City Council has banned the disconnection of customers from DH as it sees DH as strategic infrastructure that allows clean energy sources and high-quality heating services to be utilised.

The long-term strategy of the DH company in Mariupol is to transform the current production-driven DH system to a demand-driven customer-oriented DH system providing high-quality heating services with reduced environmental impact. To enable such a transformation, the DH company plans to interconnect small DH networks into larger DH systems. Ultimately, this will result in the creation of one or a few city-wide DH systems that allow for baseload DH supply from renewable and waste heat sources. These could be waste heat resources from a nearby industry, a Waste-to-Energy plant or a renewable energy source like sustainable biomass. The long-term strategy for DH in Mariupol also includes restoring DHW service for year-round supply to all customers, as well as reducing disruptions of the heat supply due to malfunction or accidents at boiler houses or in the DH network.

Three DH networks east of the Azovstal plant are proposed for interconnection – Vostok, Block 279 and Gasovaya, as shown in the figure below. 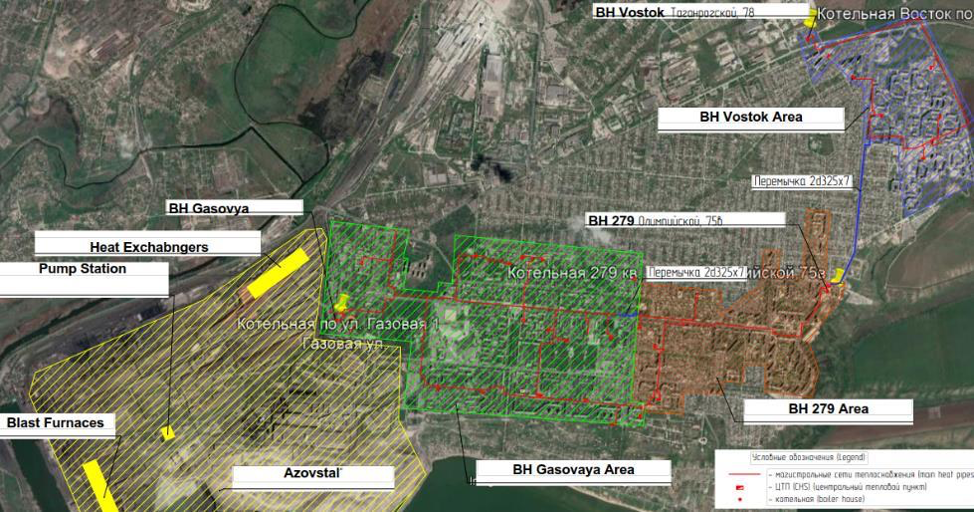 Investment Component 1: Utilisation of waste heat from the Azovstal plant

The project proposes to use excess steam from the Azovstal plant as a resource to generate DH. This will also enable DHW provision to customers during non-heating periods.

The steel industry has facilities to generate steam from the exhaust gases of its production line. The steam is used partially for the Azovstal plant’s own needs, but there is a surplus of steam that is currently aired. The project proposes to use the steam surplus to generate DH and DHW. This will substitute natural gas, without adding any new fuel to the system, thereby leading to substantial CO2 emission reductions.

The available surplus of steam is expected to cover the DHW demand of the interconnected networks during periods of its availability.

In order to utilise the waste heat resource from Azovstal, the three DH areas currently supplied by the boiler houses Gasovaya, Block 279 and Vostok must be interconnected.

The planned interconnected system will be supplied by heat generated from the waste heat resource as the baseload, supported by the Block 279 boiler house to cover peak loads. The Vostok boiler house will be closed.

The Block 279 boiler house is currently undergoing an upgrade with the installation of two new gas boilers with flue gas condensers. It is proposed that a flue gas condenser (FGC) be installed for the remaining existing gas boiler as part of the SUDH project. The heat recovered by the FGC will be used to warm up the return water, thereby reducing the use of gas.

The interconnected system is expected to benefit from more advanced control and automation solutions. The main subcomponents include:

The city has already started the installation of Individual Heat Substations (IHS) financed by an oblast programme. Thus far, 157 buildings out of total of 747 have had IHS installed. Continued IHS installation, as far as the SUDH project budget will allow, is proposed for inclusion in the project.

The two easternmost districts are prioritised, and full coverage for the Vostok area and 25% coverage for the Block 279 area are expected to be possible in the project budget. Priority is given to the Vostok area as it is considered beneficial for the strategy to take the Vostok boiler house out of operation. The exact number of IHSs to be included and the final selection of buildings for IHS installation must be determined during the design phase.

The installation of IHS will also enable energy-efficiency measures for the connected buildings. IHS carefully calibrate heat supply to buildings to ensure they receive the right amount of heat at every given point in time as well as after thermal modernisation.

The proposed investment project will contribute to improving the Mariupol environmental situation, primarily due to the reduction in carbon oxides and nitrogen dioxides. The installation of modern and efficient equipment will also lead to considerable savings in fuel and electricity, which will reduce the environmental impact.

Social benefits include improvement of the quality and reliability of DH and DHW services provided to the population. The proposed investment project will bring benefits to about 30% of the 250,000 DH customers in Mariupol.

Financing of the project

The project will be financed according to the conditions of the SUDH programme, namely:

With the estimated yearly savings from implementing the project at 1.3 MEUR, the expected pay-back of the investment project is 5.5 years. It shall be noted that the component on utilisation of the waste heat resource has a pay-back below 2 years.

The feasibility study has been approved by the Board of Directors of Nefco as well as by the Mariupol DH Company and Mariupol City Council. In March 2021, Mariupol City Council approved the provision of a municipal guarantee to the DH Company to request loans for the SUDH project. Once the investment project and associated borrowing have been approved by the Ministry of Finance of Ukraine, Nefco and Mariupol will be able to sign the agreements and start the project implementation.